Home Raoul's TGIF In the Mood

You can surmise from the title that there is a new occupant in our humble abode. Let me establish that I’m not in favor of this permanent visitor. Bloomer is a white Siamese-mix of a cat. This is my wife and my daughter’s idea. Before you accuse me of being an animal hater, let me tell you about our dog.

If you’ve been a subscriber for over 5 years you know about Zoe, our Shi Tzu who I christened “The Dog Who Would Never Die” because she overcame death several times. I never approved of Zoe. But the kids wanted a dog and my wife joined their chorus and their coup to win by majority vote. After a week or so, when the initial cuteness waned, the responsibility of feeding her and bringing her to the vet was thrown to me (as I predicted). What made it even worse was I was the one who was tasked to put him to sleep.

For years they said I shouldn’t feed her human food. But that’s what I fed her because she liked it. She should have died with the diet I gave her but somehow she survived for over 12 years. But one time, Zoe’s fur blocked the passageway of his poop and after crying in pain all evening, the next day I drove her to the Vet for Zoe to be put to sleep. I’m the guy who didn’t want a dog yet I’m the one who had to do the dirty execution alone. Those cowards! On our way,  I remember very clearly Zoe sitting at the passenger seat and staring at me with his teary puppy eyes and whimpering in pain. On the radio a song played “Faithful Friend” by Twila Paris — I kid you not! When I listened to the words, I broke down and cried like a baby. How embarrassing. A few minutes later, I remember the conversation with the Vet. I gave the Vet permission to put my “friend” to sleep. I cried again — in front of the Vet!!! The Vet said he was going to try and save Zoe’s life. Well, that’s what they all say. I left with a heavy cloud. I went home and my daughter hated me because I didn’t even give her an opportunity to say goodbye. The cloud expanded into a thunderstorm throughout the now quiet house.

And then, miracle of miracles! 2 days later, the Vet called and said, Zoe was alive! The Vet gave Zoe a special diet that somehow patched the wound and Zoe returned bald but wagging her tail. It was a joyous time.

Zoe has since passed away. The details are too painful and complicated to explain. The sadness hasn’t left me. And so when my wife said she wanted a cat or another dog, I vehemently refused. Heaven and earth may pass away — but my wife always gets her way. Bloomer arrived when I wasn’t home.

It’s been over a week now and I still have refused to look at The Cat straight in the eye. I don’t even know if it’s a he or a she! I really don’t want to get attached but the darn CAT tries to charm me by sitting on my lap or wrapping around my legs. The worst is when she sleeps beside me. I fear this is going to be a losing battle. Like the Borgs … resistance is futile!

I know I will grow attached to that manipulative animal. I know I will outlive The Creature and I will mourn again. Hurt again. I have every right to be mad at my wife and my daughter. But (and this is a big BUT) when I see my wife doting over that THING, when she comes home excited to see the MONSTER  —- I realize I need to accept The Cat for my wife’s sake. It’s what husbands do. It’s what I do for the one that I love.

“I had been told that the training procedure with cats was difficult. It’s not. Mine had me trained in 2 days.”
— Bill Dana

Shared by Don of Kelowna. B.C.

Laughing Babies and their Pets
Sent by Naomi of N Hollywood

If you can’t stand cuteness, don’t watch this. Infectious baby laughter and some very intelligent animals.

Mixing warmth and magic is pretty unusual. Watch how he astounds and makes people cry.

Teens and a Rotary Phone
Sent by Francesca of CA

Wanna feel really old? Watch these teens having a hard time figuring out how to use a rotary phone. 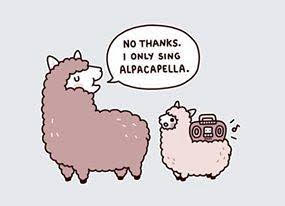 There was the person who sent ten puns to friends, with the hope that at least one of the puns would make them laugh.

No pun in ten did.

Thanks to Naomi of North Hollywood who shared this photo 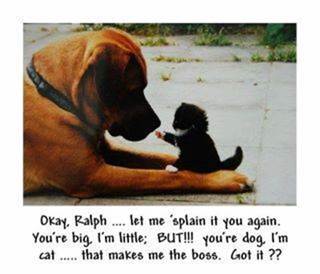