It was a cold, drizzly day with the constant pitter patter of rain.  I thought my eyes had deceived me as I noticed, a few steps ahead, a German soldier standing guard. I moved closer. It was a German soldier in a WW1 uniform trying, very cleverly, to make tourists aware of a unique attraction. I was near the village Vienne Le Chateau, deep in the heart of the Argonne forest. The uniformed man was Frenchman Serge Tourovsky, who provides a marvelous “You-are-here” feeling that “Yes,” you’re back in WW1.  Discovered in 1996, Camp Moreau is a 10 year re-creation of a real German rest camp from WW1. It’s so realistic you expect German infantrymen to appear any second and fire the menacing looking cannons nearby. 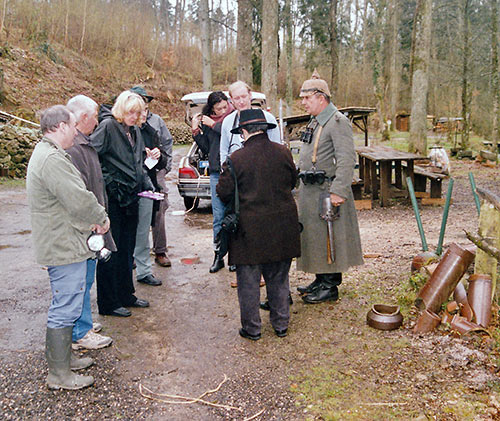 Although a “Tourist Site Attraction,” Camp Moreau is NOT publicized with any major billboards, but rather as an “Afterthought” with these two roadway signs. When John was there in 2005, “it looked” he said, “that if the nearby foliage grew too much, the signs would disappear.” Photo above right shows one of the concrete parts of the base used as both billets and storage space for ammunition. Photo on the right is the (very!) colorful Frenchman, no less, in his WW1 Uniform of a German soldier of that era. His explanation of the camp was, said John, “absolutely fascinating.”

As much of WW1 was fought in trenches, it’s hard trying to imagine how it REALLY was in those deep gouges in the ground, but The Marne Interpretive Center 14-18 has an exhibit that brilliantly re-creates trench warfare. You’re surrounded by sandbags, like a real 1914-1918 trench, and you undergo what it was like to fight in those yawning ditches — the rat-a-tat of the machine guns convince you this is the real thing.

It’s the biggest fort in the area of Verdun, and is another reason why the Lorraine battlefield sites of WW1 are more interesting than Normandy. It’s the Citadelle Souterraine. Inside you’re treated to a fascinating 25 minute ride aboard a Disneyland type vehicle seating five people, that gives you a mesmerizing trip around the fort — it’s cold and dark for most of the journey, but you’ll be intrigued by the 15 tableaux depicting the life of a French infantryman; the fort’s bakery in action; the hospital; and even the trenches. This ride are so real you wonder how the actors in front of you keep warm in the bone chilling cold — then it hits you; what you’re seeing are holograms. Tours, including English, are in six different languages. 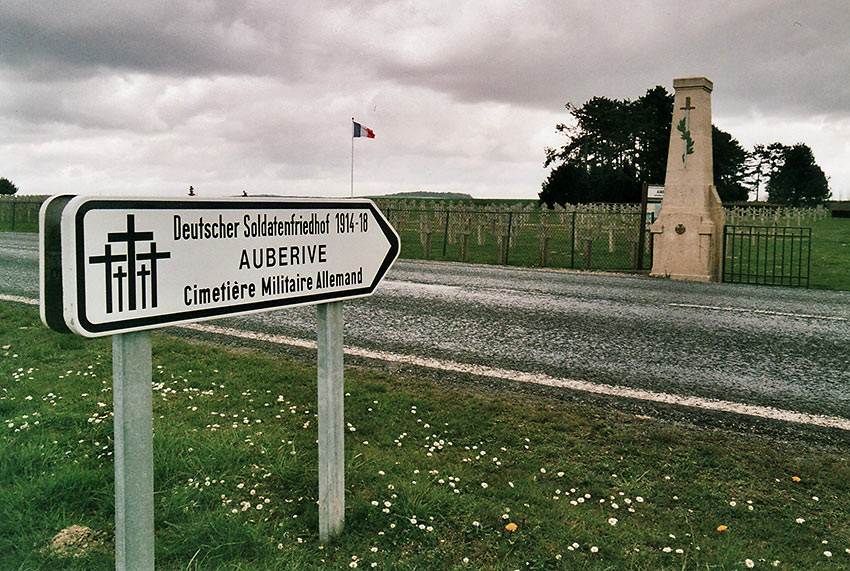 “Another aspect of WW1, and visiting the Lorraine region of France, says John, “is that as you’re driving along in the wide open, countryside, you quite suddenly come across a cemetery. There is no ‘advance notice,’ or a billboard announcing it,  it is just there in the middle of nowhere, like this one of German military. We often saw them with no identification of what nationality it was, and one had to get out the bus — or car — to see the gravesites up close and personal, to know what country the soldiers were from.” He goes on to say that is NOT the case of any American military cemetery. “All are cared for with loving attention, and all are in First Class condition,” he said, “and it makes you proud to be an American to know how WE care for OUR military who paid the ultimate price fighting — and dying — to protect the freedom of others.”

Fort de la Pompelle is about 3 miles outside Reims. Inside there’s a stunning array of military memorabilia — including a collection of French 75 mm cannons, to uniforms and a vast array of military items — from medals to lots of personal items, plus 560 of those classic looking German Wurttemberg steel helmets with the large pointed spike on top. Each helmet, in mint condition, is worth about $3,000. 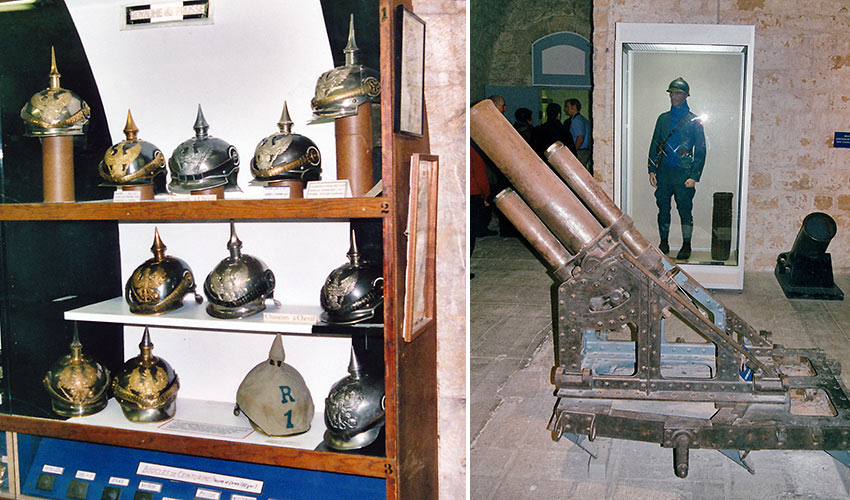 Part of the spellbinding and for sure, mesmerizing artifacts on display at Fort de la Pompelle – one of the cannons (or maybe it’s a Howitzer?) and the always intriguing helmets of WW1 worn by the German military 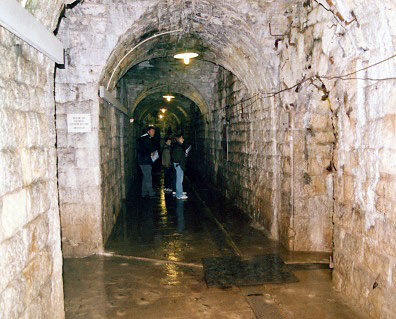 The “steel plate” (seen lower center of photo on the right) that our Guide was able to lift up and then crash down on the stone floor. Note too, the “dampness” that pervaded the entire Fort, “it was, says John, “extremely cold in the Fort, and must have added – enormously – yet another debilitating aspect, to the suffering endured by those who fought and died in these appalling conditions.”

The Lorraine region is bursting with unique memorials and museums, but for me, Fort de Douaumont in the Meuse region is the most mesmerizing. Wandering around this forbidding fort, I looked up at the walls. They were dripping with moisture, and rivulets of water were slowly sliding down to the already wet and slippery floor — how unremittingly awful, I thought, it must have been for the soldiers who lived and died here all those years ago. My reverie was interrupted by our guide, saying she wanted me hear the sound when, in WW1, a huge shell exploded on the fort. With both hands she lifted up an enormous steel plate from the hard stone floor. “Block your ears with your fingers” I heard her say, as she dropped the steel plate back down. Even with a roof that’s 40 feet thick, the noise was so shatteringly loud it was like a 100 freight trains colliding at hi speed.

The sights and sounds of WW1 in the Lorraine region of France, is thrilling, captivating and absolutely mesmerizing. There’s nothing like it in Normandy, and if you require something different in your travels, plan on visiting France’s Lorraine region.  It’s stunning.