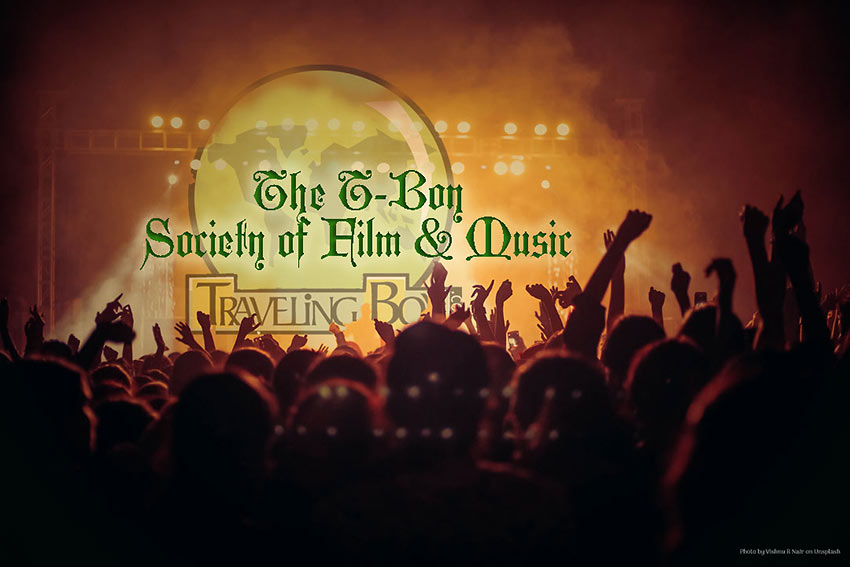 On the morning of April 22, 2020, the T-Boy Society of Film & Music met via Zoom for the final vote in the Top Five North-American-English language novels where there is a focus or side focus on travel. Could we have been more specific? Well, we did try. Never-the-less, our rather wide-open theme were both eclectic and deeply personal, giving T-Boy readers a chance to see another side of our writers. As can be expected the presence of Ernest Hemingway and Jack Kerouac dominated the lists. Regarded by many as the greatest and most influential writer in the 20th century, Hemingway’s writing  style is minimalistic, direct, and unadorned, a result of his early newspaper training. While Kerouac termed his style of writing, “spontaneous prose,” which gushed with unedited prose that captured the truth of the moment. Both writers’ work are based on personal experience. John Dos Passos, a Hemingway contemporary, and Mark Twain, whose novel The Adventures of Huckleberry Finn, is considered by many as the Great American novel, are also well represented. Selections ranged from Cormac McCarthy’s The Road, a bleak 2006 post-apocalyptic novel, and Hunter. S. Thompson’s gonzo journalism to Anne Tyler’s The Accidental Tourist, about a travel writer who detests travel.

The members huddled around their laptops in the 11 rounds of voting. Points were given to novels on a sliding scale of five, with extra points for books appearing on multiple lists. Was it scientific? Don’t even ask. –  T-Boy Society of Film & Music

1. A Moveable Feast  by Ernest Hemingway 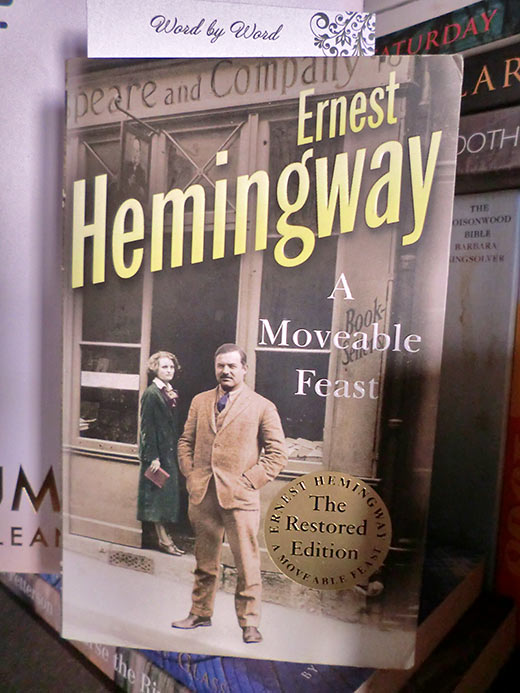 A Moveable Feast is a memoir by author Ernest Hemingway about his years as a struggling young journalist and writer in Paris in the 1920s. First published posthumously in 1964 – three-years after his death – it was edited by Mary Hemingway, his fourth and final wife, from an unfinished manuscript. Paris is the main character in the book, where the city is described in great detail: its districts, trains, streets, hotels, apartments, and cafes; many of which can still be found today, along with specific addresses. Collectively known as The Lost Generation, post-WWI artists congregated at bohemian cafes,  Gertrude Stein’s apartment (serving as a salon), and Sylvia Beach’s bookstore, Shakespeare and Company. Hemingway made new friends and renewed old ones with the likes of Ezra Pound, James Joyce, Max Eastman, Zelda  and F. Scott Fitzgerald, Cole Porter and the young painter, Pablo Picasso. These friendships would be instrumental in Hemingway’s development as an artist. He was married to his first wife, Hadley Richardson (eight years his senior), with whom they lived together for five years, generally in poverty. Hemingway provides a moving description of Hadley and their relationship. She was the love of his life, the mother of his first child, his muse and his hero, who helped him find his writer’s voice. A Moveable Feast is considered Hemingway’s tribute to Hadley. His 1926 novel, The Sun Also Rises, is dedicated to her.

In 2009 a new edition, titled the Restored Edition, was published by Seán Hemingway, grandson of Hemingway and Pauline Pfeiffer. He made numerous changes, but mainly to remove disparaging comments about Pfeiffer.

The title of the book stems from a letter Ernest Hemingway wrote to a friend in 1950: If you are lucky enough to have lived in Paris as a young man, then wherever you go for the rest of your life, it stays with you, for Paris is a moveable feast.

2. On the Road  by Jack Kerouac 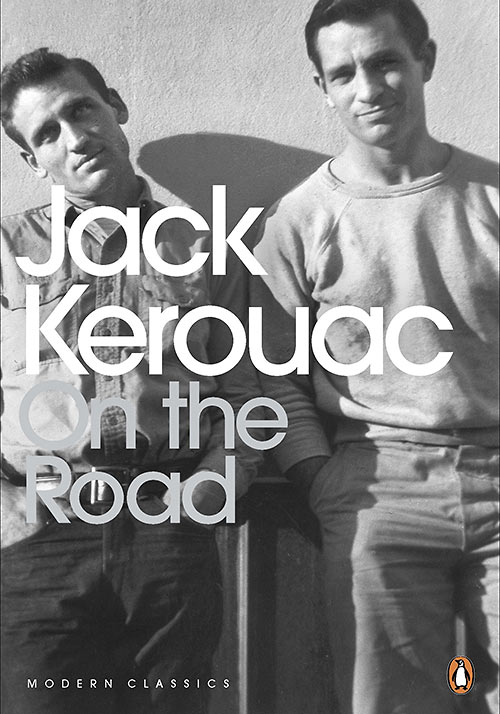 Jack Kerouac  (Jean-Louis Kerouac) was an American novelist and poet of French-Canadian ancestry. Considered a literary iconoclast, he stood alongside William S. Burroughs and Allen Ginsberg, as a pioneer of the Beat Generation. Recognized for his method of spontaneous prose, his writings were highly influenced by the work of his literary idol, Thomas Wolfe. His second novel, 1957’s On the Road, is regarded as the defining work of the postwar Beat and Counterculture generations, with its protagonists living life against a backdrop of jazz, poetry, and drug use. The book describes Kerouac’s road-trip adventures across the United States and Mexico with Neal Cassidy – a charismatic man of unbridled passion – whom Kerouac describes as having lived a third of his life in reformatories, a third in pool halls and the final third at the library. Kerouac wrote the final draft in 20 days, with his wife supplying him with Benzedrine, cigarettes, bowls of pea soup and mugs of coffee.  Before writing, Kerouac cut sheets of tracing paper into long strips, wide enough for a typewriter, and taped them together into a 120-foot (37 m) long roll which he then fed into the machine. This allowed him to type continuously without the interruption of reloading pages. The resulting manuscript contained no chapters or paragraph breaks. Publishers initially rejected On the Road because of its experimental writing style and sexual content that could result in obscenity charges, a fate that later befell Burroughs’ Naked Lunch and Ginsberg’s Howl. When On the Road first appeared in 1957, readers felt the beat of a new literary rhythm; an odyssey that captured the soul and changed the landscape of American fiction forever. It still feels that way for the readers of today.

Nothing behind me, everything ahead of me, as is ever so on the road. – Jack  Kerouac

3. The Adventures of Huckleberry Finn  by Mark Twain 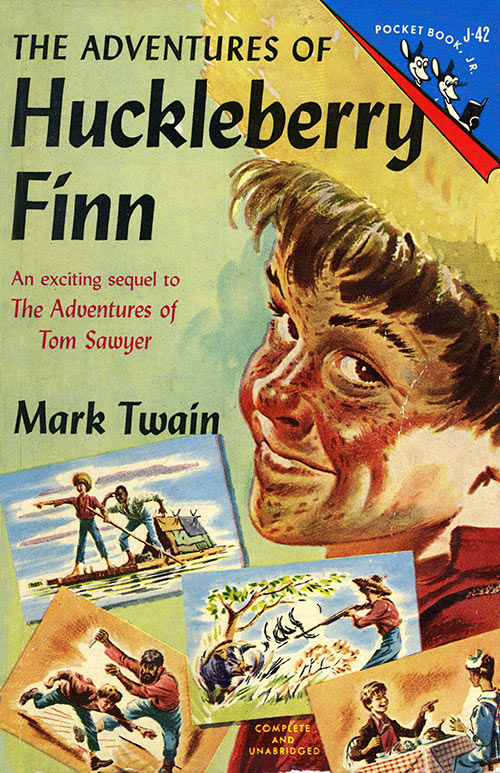 Samuel Langhorne Clemens (later Mark Twain) was raised in Hannibal, Missouri on the Mississippi River. It is a river that would help define him.  As a child he would watch passing river boats and dreamt of his own adventures. At the age of 21, Clemens fulfilled his dream to become a steamboat pilot, and then eventually moved out west, earning a living writing for newspapers, and taking  the pseudonym of Mark Twain, a term used on steamboats to signal that the water was 12 feet deep. His most famous books are the two river novels about the adventures of young boys on the Mississippi River. The first was The Adventures of Tom Sawyer (1876) and was followed by its sequel, The Adventures of Huckleberry Finn (1885), commonly named one of the Greatest American Novels. Set in a Southern antebellum society, Huck runs away with Jim, an escaped slave, with the plan to raft to the free states of the North, where slavery is prohibited The book is noted for its colorful description of people and places along the Mississippi River and a scathing satire on entrenched attitudes, particularly racism. Huck is in moral conflict with the values of society, while unable to consciously refute them. He makes a moral choice based on his own valuation of Jim’s friendship and human worth, a decision in direct opposition to the things he has been taught. The Adventures of Huckleberry Finn was widely criticized upon release due to its  use of ‘coarse’ language; a bold stroke made by Twain when he completely moved from pure literary writing to dialect writing, which he called Southern humor.

Twain describe the novel as …a book of mine where a sound heart and a deformed conscience come into collision and conscience suffers defeat. 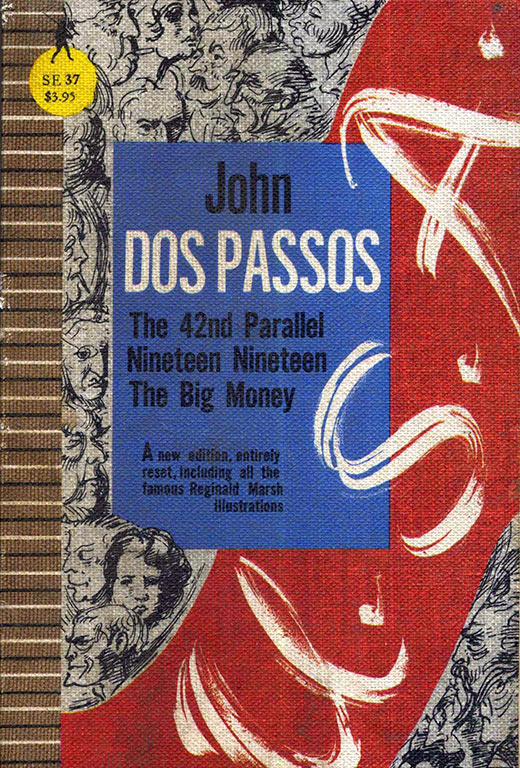 John Roderigo Dos Passos was an American novelist, most famous for his U.S.A. trilogy, which consists of the novels, The 42nd Parallel (1930), 1919 (1932), and The Big Money (1936). Dos Passos used experimental techniques in these novels, incorporating newspaper clippings, autobiography,  biography, and fictional realism to paint a vast landscape of American culture during the first decades of the 20th century. Though each novel stands on its own, the trilogy is designed to be read as a whole. Dos Passos’ political and social reflections in the novel are deeply pessimistic about the political and economic direction of the United States, and few of the characters manage to hold onto their ideals through the First World War. The novel reflects the author’s sympathy, at the time of writing, for the Industrial Workers of the World (IWW) and his outrage at its suppression, for which the book expresses a deep grudge for President Woodrow Wilson. Like Hemingway, he was part of The Lost Generation, and, like his fellow writer, a volunteer ambulance driver during WWI. His experiences during the Spanish Civil War disillusioned him with left-wing politics and also ended his relationship with Hemingway. By the 1950s, his political views had changed dramatically, and he had become more conservative. In the 1960s, he campaigned for presidential candidates Barry Goldwater and Richard M. Nixon.

America our nation has been beaten by strangers who have bought the laws and fenced off the meadows and cut down the woods for pulp and turned our pleasant cities into slums and sweated the wealth out of our people and when they want to they hire the executioner to throw the switch. – John Roderigo Dos Passos

5. The Road  by Cormac McCarthy 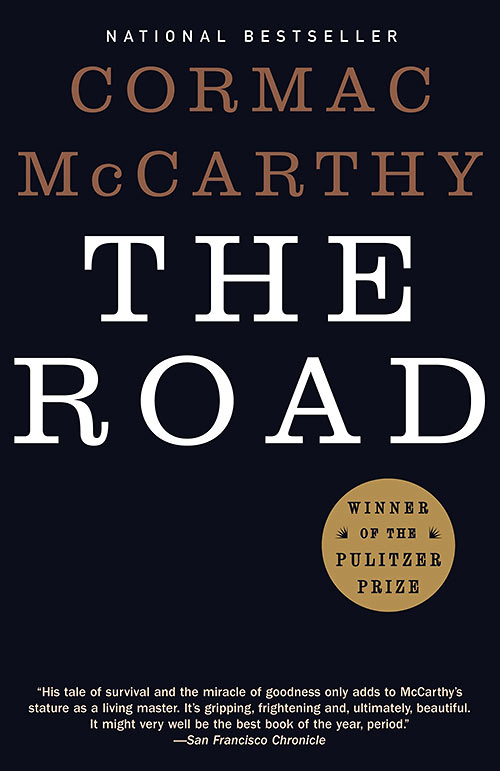 The Road  is a 2006 post-apocalyptic novel by American writer, Cormac McCarthy. The book focuses on  a father and his young son as they traverse across an America, where the landscape is covered with ash, virtually devoid of any form life due to an unspecified cataclysm. Close to starving, the man realizes they cannot survive the winter, and takes the boy south along empty roads towards the sea, carrying their few possessions in knapsacks and a supermarket cart. It is the only world the son has ever known, and the man patiently explains to him that they are “good guys” who are “carrying the fire.”  The man is suffering from a serious cough and knows he is dying. The pair have a revolver, but only two rounds. The father has taught the boy to use the gun on himself if necessary, to avoid falling into the hands of renegade marauders and cannibals. McCarthy is not interested in the past, but only in the moment. All that matters is their journey and relationship with one another. Like the films of French director, Robert Bresson, who would iron out his images so that not one would have a greater significance than the other,  McCarthy’s prose is  pure and precise, with very little punctuation. His stylistic convictions are one of simplicity, where his minimalist approach works in the interest of maximum clarity.

The things I believed in dont (sic) exist any more. It’s foolish to pretend that they do. Western Civilization finally went up in smoke in the chimneys at Dachau but I was too infatuated to see it. I see it now. – Cormac McCarthy

The Dharma Bums – Jack Kerouac
The Death Ship – B. Traven
The Adventures of Huckleberry Finn – Mark Twain
Fear and Loathing in Las Vegas – Hunter S. Thompson
The Treasure of the Sierra Madre – B. Traven

A number of members felt so strongly about their top selection that they preferred to refrain from offering other titles.

Favorite State for a Food Experience

Inns were once places where travelers could have a simple meal, then hit the road for a co…