Home Raoul's TGIF You Are Unique

Did you get the memo? The world was supposed to end last January 13, a Saturday! There are rumors that the false alarm about a North Korean Nuclear attack headed for Hawaii was real … so was the false alarm headed towards Japan three days after. Silly you say, but rumors also contend that the increased military activities going on in South East Asia are in direct response to that. We were fortunate that the US counter offensive was able to thwart the attack. In other words, “the good guys” prevented a nuclear war.

Think about it. It’s like barely missing a car accident. You swerve and prevent a life changing episode; then 5 seconds later, you forget your blessings.

What were you doing that day? That Saturday I was holding 2 meetings in La Habra with my partner John and looking forward to visiting my son in New York in a few days. Imagine, on that day all our wealth, all our debts, all our obligations, all our hopes and dreams — should have been erased instantly in a nuclear cloud (at least for those near Hawaii and Japan).

Would you have been prepared to go in a violent flash? A more important question: where would you have gone? Let’s go down the line of popular beliefs.

Atheists would say their existence would have ended right there. No spiritual mumbo jumbo to elevate to. Ta dah! The End!

Reincarnationists (?) would wake up as a dog, a flea of the dog or a bacteria of the flea (depending on how good they were). Sadly, when they wake up as the next creature the nuclear dust would kill them again and they would cycle down to something even more insignificant. (At least that seems to be the logical progression).

The God-fearing people? Well, depending on their belief they’d wake up in a place of comfort or a place of suffering.
None of those choices seem very inviting, do they? Everything you’ve ever done on this earth would crescendo to this moment in time … the moment of truth. It should be your most important moment because it’s the end of your journey in this present life. What are you doing about it? Are you in car crash memory lapse mode?

Wouldn’t it be nice to know how to wind up in that “comfortable place?” (Wanna call or email me to discuss? I’d love to hear your take on this). My intent is to let you think because we are all living on borrowed time (literally speaking). God, in His infinite wisdom, has given us extra time to prepare and discuss that moment, with people we love and trust, the evidence that would demand a verdict. The truth is out there. I believe in a loving God and I believe He provided that answer. We just need to look for it.

Even if the rumors aren’t true. Why dilly dally? Remember: at this very moment, forces are gearing up for battle in South East Asia. Who knows? Our borrowed time may soon return to its maker.

“Ask and it will be given to you. Seek and you will find. Knock and the door will be opened to you”
— Luke 11:9

Contributed by Mike of New York

The young woman who submitted the tech support message below (about her relationship with her husband) presumably did it as a joke.

Then she got a reply that was way too good to keep to herself. The tech support people’s love advice was hilarious and genius!

Last year I upgraded from Boyfriend 5.0 to Husband 1.0 and noticed a distinct slowdown in overall system performance, particularly in the flower and jewelry applications and intimacy, which operated flawlessly under Boyfriend 5.0.

In addition, Husband 1.0 uninstalled many other valuable programs, such as Romance 9.5 and Personal Attention 6.5, and then installed undesirable programs such as: NBA 5.0, NFL 3.0 and Golf 4.1.

Please note that I have tried running Nagging 5.3 to fix these problems, but to no avail. What can I do?

The response (that came weeks later out of the blue):

First keep in mind, Boyfriend 5.0 is an Entertainment Package, while Husband 1.0 is an operating system.

Please enter command: I thought you loved me.html and try to download Tears 6.2.

Do not forget to install the Guilt 3.0 update. If that application works as designed, Husband 1.0 should then automatically run the applications Jewelry 2.0 and Flowers 3.5.

However, remember, overuse of the above application can cause Husband 1.0 to default to Grumpy Silence 2.5, Happy Hour 7.0, or Beer 6.1.

Please note that Beer 6.1 is a very bad program that will download the Farting and Snoring Loudly Beta version.

Whatever you do, DO NOT, under any circumstances, install Mother-In-Law 1.0 as it runs a virus in the background that will eventually seize control of all your system resources.

In addition, please do not attempt to re-install the Boyfriend 5.0 program. These are unsupported applications and will crash Husband 1.0.

In summary, Husband 1.0 is a great program, but it does have limited memory and cannot learn new applications quickly.

You might consider buying additional software to improve memory and performance.

When something EXTRA special comes up, one has 3 choices on how to remember it.

1) Tie a knot in your hanky and blow your nose frequently on the day of the “Event.” Only untie knot AFTER the event.

2) Wear a funny suit so that folks ask you “Why are you wearing THAT?” so you can reply “I need to remind myself of something IMPORTANT TODAY.”

3) Carry a VERY heavy weight in your pocket with a note that says “Event: 4pm” (or whatever). As it’s so heavy you’ll want to take frequently take it out. You always see why it’s there.

Note: These are actual spur of the moment ideas my good British friend, John, came up with. This is perfect for technically challenged seniors. It should work nicely. Thanks John!

Man With Many Accents
Sent by Art of Sierra Madre, CA

This guy can talk with flawless different accents. Pretty entertaining.

The Magician and The Spoiler
Sent by Peter Paul of S Pasadena, CA

Pretty cool Chinese magician … except that his friend’s there to ruin everything.

Thanks to Jackie of Whittier, CA who shared this photo 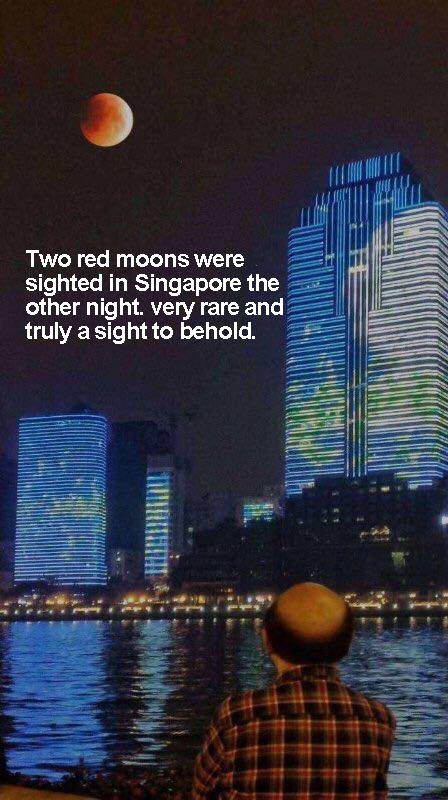