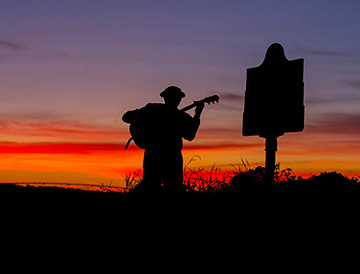 What Country Taught Me About Race

I’m often asked what I consider the safest countries for black people or the most welcoming for black travelers. But I can’t answer those questions. I’ve been traveling internationally since I was four years old. For my Ugandan immigrant parents, vacationing was important — a way to learn more about the world through experience — and they made it part of our lives every year. Whether domestic or international, we went somewhere every summer: Canada, Minnesota, Jamaica, Disney World, the Bahamas. By the time I graduated from high school, I had been to seven U.N. member countries, and in 2008, I moved to Japan to teach English. From there, I continued living abroad, and continued traveling. And in February 2017, with 60 countries under my belt, I started a two-and-a-half-year journey to visit every country in the world

What the Mississippi Delta Teaches Me About Home — And Hope

Finding struggle and resilience on a road trip through the birthplace of the blues. I’ve thought a lot about home during the quarantine. The place and the idea. The way it calls to us, and the way the pulse of daily life can sometimes drown it out. My home is near the courthouse square in Oxford, Mississippi, a vibrant modern college community. That’s where we wake up and make scrambled eggs for our toddler. But I’m from a nearby place called Clarksdale, birthplace of the Delta blues, the town that gave the world the likes of Muddy Waters, Sam Cooke, and Nate Dogg—a place where on a clear night I can hear plantation blues, the protest soul of Stax Records, and the heavy sound of G-Funk LA all mix in the open air.

“History, despite its wrenching pain cannot be unlived, but if faced with courage need not be lived again.”

I spotted the reflection-inducing words by the late Maya Angelou just moments before entering the lobby of Montgomery’s Springhill Suites Hotel. They adorned a nondescript wall at the corner of Coosa and Bibb, which was steps outside of my temporary retreat. Now I’ve always been more Manhattan than Montgomery, slightly more Malcolm than Martin, with more northeastern edge than southern charm. But there I was, just days before the Christmas holiday, excited, and yet nervous, to be in what I considered the epicenter of Black history.

A Native American community severely impacted by the COVID-19 outbreak has received an outpour of donations from Irish people, who are returning a historic favor from 173 years ago.

In 1847, the Native American Choctaw nation sent $170 ($5,000 today) of relief aid to the Irish people impacted by the great potato famine. Now, the Irish are reciprocating the act of goodwill by donating funds to the Navajo nation, which has been severely impacted by COVID-19, with at least 2,373 cases and 73 deaths as of May 3.

Frozen food can be great to stock up on because it can be stored for quite some time without going bad.

Since not everything maintains its quality when frozen, Insider spoke to chefs to help figure out which items are worth grabbing and which you should leave on the shelves.

Out of the cradle endlessly rocking,
Out of the mocking-bird’s throat, the musical shuttle,
Out of the Ninth-month midnight,
Over the sterile sands and the fields beyond, where the child leaving his bed wander’d alone, bareheaded, barefoot,
Down from the shower’d halo,
Up from the mystic play of shadows twining and twisting as if they were alive,
Out from the patches of briers and blackberries,
From the memories of the bird that chanted to me,
From your memories sad brother, from the fitful risings and fallings I heard,
From under that yellow half-moon late-risen and swollen as if with tears,
From those beginning notes of yearning and love there in the mist,
From the thousand responses of my heart never to cease…

Americans may be surprised to learn that they don’t own the best passport in the world.

According to research conducted by world-leading offshore consulting firm Nomad Capitalist, Swedish, Luxembourgish and Irish passports are the best ones to own.

This year, three countries came out on top with Sweden, Luxembourg and Ireland all scoring 114 points.

Recipes With Only 3 Ingredients

Cooking at home is usually healthier and more affordable than going out, but with more and more restaurants temporarily closing due to the pandemic, quick and easy recipes have become essential. If you’re busy with work, family, or lockdown life in general, it can be hard to find the time and energy to fuss with complicated recipes. If hunting down a long list of ingredients makes you want to quit before you’ve started, take heart. We’ve rounded up our favorite 3-ingredient recipes — 25 of them, ranging from breakfast to dessert. As long as you have kitchen staples like salt, pepper, and olive oil, these tasty recipes will be a breeze.

Homeless in Border Town Getting By, Livin’

She didn’t hesitate to give what she could give. Shylah Pettigrew knows all too well what it feels like to be hungry and thirsty. Her years of living on the streets, as well as the teachings of her mother, taught her to be compassionate, she said. “You can’t pass somebody by without offering,” she said. The Lupton, Arizona, native saw her cousin and several other people sitting outside where she was attending a birthday party. The people, whom the city of Gallup categorizes as transients, or homeless, sat on the concrete bench enjoying the warm Saturday afternoon sunlight in downtown Gallup.